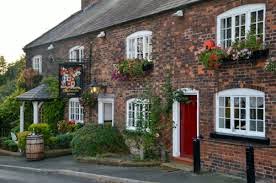 Despite being located but a stone’s throw from my abode, I’d only ever been to the Chetwode Arms once. I found it to be expensive - astronomically so – and could still recollect with alarming clarity the palpitations, chest pains and shortness of breath that accompanied the arrival of the bill. On a positive note, Pete Waterman was there that evening. Apparently it’s his local, and he’s mighty attached to it. He would never, by all accounts, give it up, let it down, run around or desert it (to quote Waterman protégé Rick Astley, Newton-le-Willows’ most notorious musical exponent).

This is as picturesque a country pub as you could ever hope to encounter. Located just off the A49 – a road so appealing to tractors that they feel the need to converge on it in vast numbers during rush hour – it sits roughly equidistant between Warrington and Northwich. The proprietors are South African and, whilst this influence doesn’t predominate in terms of the menu’s composition, it certainly informs it a smidgen. The specialty here is hot rocks – cook-it-yourself dinners comprising hunks of hissing meat on a molten slab. The pub’s interior is labyrinthine. It is riddled with nooks and crannies in which can be found hot rock-endowed diners browning meat with a captivated zeal.

Upon being seated, we ordered a house white at £17.50 from the rather pricey wine list. It was decent, actually, and as dry as could be – ideal for quaffing in the not-unpleasantly smoky atmosphere. I went for the duck pate starter, which arrived in its own porcelain vessel, and was capped by offerings of fruit and chutney, alongside a heap of salad. I’ve never had blackberries dipped in pate before. It felt gluttonous. It felt wrong. But I couldn’t help shovelling them all down - whole, in the main. The pate itself was a touch on the runny side, but – thankfully – fiercely rich. Accompanying toasted brioche lent an almost sickly sweetness I hadn’t expected, contrasting nicely to the hearty pate.

My hot rock main arrived a short time later. One can choose from a dizzying array of game meats which, by and large, once roamed the grasslands of Southern Africa – Wildebeest, Springbok, Eland, and Impala. Surely David Attenborough would approve. On this occasion they had a selection of ‘guest’ meats on special – Argentinian horse being one example (a ridiculously cute equine quadruped), Alpaca another.

I’ve never been that mad on the prospect of tucking into members of the camel family. They just don’t look that appetising. You’d think they’d be all sinewy, what with all the roaming across endless expanses of emptiness and the like. The alpaca’s no real exception. Our Lass owns a teddy bear made from Alpaca fiber. It is a soft as you like, and exudes a distinct, if rather questionable aroma. It’s had a stint of rotten luck in the shape of a feline nemesis that's rather partial to throttling the thing whilst simultaneously applying rapid, disembowelling strokes to its lower quarters.

On this occasion, I decided to stick to more familiar territory. It was going to be the so called ‘Forrest Gump’ for me i.e. wild boar and fillet steak. (How this relates to the eponymous book/film is unclear.) The boar was akin to pork but gamier and, as I determined in the early hours of the next morning when gripped with gut-wrenching cramp, could probably have used some more cooking than the thirty-seconds-on-each-side that I allowed it. Accompanying fillet steak was exemplary, as thick as your wrist and exquisitely tender. Needless to say, it was barely shown to the hot rock. Brown on the outside, cold in the middle – that is what it’s all about. I’d probably have eaten it raw, if truth be known.

Various accouterments were served up with the meats: mushrooms, onions, some rather greasy home-fried chips, as well as the world’s most colossal onion ring, the latter surmounting the towering fillet that loomed from the hot rock as a monolith – as a trawler through fog, if we’re going to get all poetic about it. Our Lass went for a home-made pasta dish which she extolled as wondrous beyond belief. It featured in its midst several shell-on king prawns whose exoskeletons were swiftly and mercilessly pulverised by nimble, adroit digits. But, at £19, that dish was relatively steep. It might well be the most expensive pasta in living memory.

Suffice to say, I was stuffed after putting all that away. I had, mid-course, deftly unfastened a trouser button so as to release the fleshy subsidence that near threatened to spill from my jeans. It was all getting too much. My eyelids started to grow heavy. I was feeling weary. It was time for a lie down, surely. And, as delicious as several of the desserts sounded, no way was I having one.

Most pleasingly, I didn’t suffer the onset of a coronary embolism upon becoming acquainted with the tab. It stacked up to roughly £70 all in and, although some of the dishes were on the expensive side, the amount of scran that was forthcoming probably justified the brass I coughed up. Besides, if it’s good enough for Pete Waterman, who am I to argue? I’m sure some folk would consider themselves exceedingly lucky, lucky, lucky to find a quirky hostelry such as the Chetwode Arms on their doorsteps - in their imagination, there’d be no complication – they’d be chowing down there all the time.