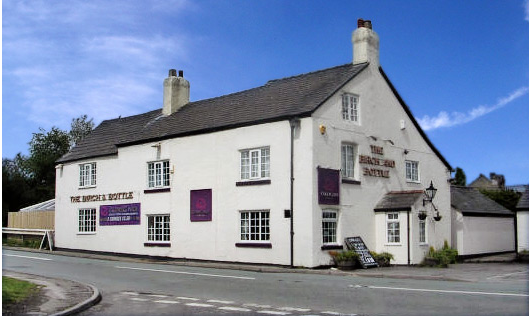 Chang Noi was formerly situated on the outskirts of Chester, having relocated to the Birch & Bottle, outside Antrobus, some eighteen or so months ago. The pub is of the spit and sawdust variety – gaudy, loud carpets, chintzy decor - and hasn’t seen a great deal in the way of decoration for, I dare say, some while.

It was moderately busy on our visit, and, having pre-booked, we were directed to a table near the bar - a table so sticky your shirt sleeves adhered to it as though it were fashioned from velcro.

There is an extended dining area in the conservatory – which might well be more salubrious but, in light of the screams of a caterwauling child that emanated from it, I was thankful to be well out of the way.

Chang Noi doesn’t just do Thai. They specialise in a kind of hotchpotch fusion of cuisines broadly falling under the umbrella term ‘Asian’. The menu sounded curious, and intensely tantalising. Shortly after the delivery of a tasty Sauvignon, a starter of Ramaquin Madras was received with aplomb.


A house special, it comprised lamb and beef mince and peas bound in various spices. It was huge. In fact, it could barely be contained by the perimeter of prawn crackers fencing it in, in the manner of deep-fried riot police encircling a mincemeat mob. The bed of rice on which the dish was pivoted only added to the largesse. It was quite, spicy, too - so far, so good.

The main courses can roughly be divided into two camps: ‘Thai cuisine’ and ‘our own recipe’ (i.e. other). I tried the kamikaze curry from the latter section, intriguingly described as ‘our version of a Vindaloo but with a lot more taste.’ I expected something hot, and I wasn’t disappointed.

However, the duck meat (available at a supplement of £1.50) was sub-par – stringy, chewy and, worse, elusive. It was a real shame. And, although the heat from the dish was phenomenal, the sauce itself was a watery soup in which could be found the odd piece of sinew or fatty duck skin. Moreover, the garlic naan I ordered on the side was straight from the shelves of Asda, via the microwave. Mrs V’s Thai red curry, meanwhile, hit the spot, but wasn’t really that spectacular.

I admire what Chang Noi is trying to do here – set up in a stalwart country pub, offering decent Asian cuisine at reasonable prices. But, on our visit, the fare was a bit hit-and-miss. Granted, they’re trying to be a bit different. Perhaps, if they concentrated solely on producing Thai cuisine of the finest quality - rather than making fusion-based deviations - they might find themselves onto a real winner.


That said, I would return to Chang Noi on the strength of the starter alone, further ensuring that, on any repeat visit, I opted for something a bit more prosaically Thai. I do wonder how this venue will fare in light of the recent advent of Siam Village in Stockton Heath - only time will tell.