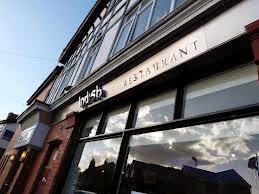 You just can’t beat a Ruby Murray – especially on a Friday night. It’s one of the vital necessities of life, along with dishwashers and silica gel-based cat litter. Stockton Heath deserved a pleasingly-priced curry house, if only as a counterpoint to rip-off venue the Cinnamon Lounge (roughly £13 for a bog-standard curry in there). Since opening its doors at the arse end of 2012, Indish has gradually garnered a following, and it was heartening to find the place chocker on one of the hottest nights of the year.

Now, I never usually bother with poppadoms. They fill me up. And, in truth, I’m a bit resentful about being rinsed for a couple of quid just to be able to bathe shards of the disc-shaped sundry in gloopy and off-coloured substances characterised as the ‘chutney tray’. But, when poppadoms are offered up gratis, you can be sure I’ll hoover every last crumb (in addition to any lime pickle that might have made its way to the table). And that is exactly what happens at Indish – a heap of complimentary poppadoms set down before all who arrive.

A mixed kebab starter almost uniformly hits the spot. At a bare minimum, it ought to consist of chicken tikka, lamb tikka and sheek kebab – the indispensable trinity. Though it would benefit from the addition of a tandoori lamb chop in its meaty line up, Indish’s mixed kebab starter proved a good example of the genre.

As is common practice these days, the starter arrived hissing and spitting on an oval griddle of sufficient hotness as could take the skin off your hand. I dislike this mode of presentation immensely. Unless you extricate your meaty delights quickly, they wind up chewy, overcooked and more or less adhered to the base of the dish. If you’re luck’s in, you might be offered a pair of tongs to expedite transferral. But, even with these in your armoury, you need to be quick off the blocks.

Main course-wise, I swerved the chef’s specials in favour of a staple of lamb tikka pathia. A pathia ought to be sour, a touch sweet and hot – not blow-your-head-off hot, but pleasantly warming (one notch down from a Madras on the spicy scale). Indish’s pathia met each of these criteria with aplomb. The lamb tikka was first rate – plentiful and tender. Attendant garlic naan was average, though I secretly hankered for its chilli counterpart.

I love a chilli naan. But chilli naans don’t love me, and Mrs V will seldom acquiesce to sharing such a delight. She doesn’t understand why anyone would want to consume something that possesses almost magical bowel-opening properties as to rouse the luckless diner from slumber at some ungodly hour the next morning. The garlic naan was a compromise. Her lamb saag, by the way, was exceptional – tons of meat woven in webs of rich spinach (a proportion of which had to be taken home in a foil container).

What is it about curry house dessert menus? If not identical, they’re certainly variations on a theme. I delight in perusing their subtle differences. Will the rock-hard frozen lemon be on this menu? How about its orange compatriot? Might the ‘trufito’ be available (a cocoa-based structure that better resembles a held-open sphincter). But it’s really the kids’ desserts that offer the most entertainment – a parade of unlikely characters of a vaguely sinister demeanour.

Take Miss Daisy, an irate looking bovine, or Crazy Zoo, a creature of unknown genus which boasts a malign-sounding ‘nice surprise.’ Then there’s Punky, whose squat limbs are dwarfed by an oversized, Elephant Man head surmounted by a rigid Mohican. The elusive Barry Blue, inexplicably, is the least prevalent character by far. And yet there he was, looking up at me from Indish’s dessert menu with his irrepressible smile. I very nearly filled up. Now, I could never bring myself to actually order any of these items, but seeing them on the menu is its own satiation.

To be a smidgen critical for a tick, there was a bit of an issue with service during our visit – too long a wait between starters and main course – but, in light of the free poppadoms and otherwise happy ambience, I really wasn’t that arsed about any delay. The bill amounted to roughly £45 and this included a higher-end bottle of New Zealand sauvignon, as weighed in at £18.

Website: http://www.indishindian.co.uk
Phone number: 01925861919
Tip: Fill in the form that comes with the bill and they'll send you a Christmas card