NORTHWICH, THE SPINNER AND BERGAMOT - Dinner at the Spinner 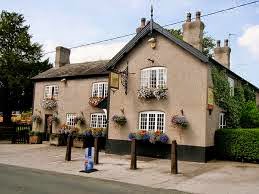 The Spinner & Bergamot is the archetypal country pub. Nestled in the picturesque village of Comberbach, this curiously-titled hostelry is so named for two fillies, whose likenesses adorn the pub sign.

This place has a perennially festive feel to it; the trees crowding the entrance are swathed with lights that twinkle all year round. Interior-wise, it's a labyrinth of cosy corners; a tangle of snug hidey-holes that lead to a high-beamed, surprisingly huge, restaurant. 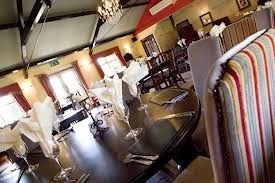 First off, the wine is expensive. And I mean expensive (for a pub, any road). You're looking at around £18 for house, with our bottle of Marlborough clocking in at around £21. The higher-end prices also translate to the menu (a sheaf whose content seldom changes). It's pub food at restaurant prices.

It arrived around two minutes after our order was taken (there's swift, and there's suspiciously swift) and, disappointingly, was absolutely rock hard in the middle, and stone cold to boot. The inferior wares were transported back to the kitchen; their replacements proving far more palatable (but not really that great). Unfortunately, this rather set the tone for the remainder of the evening; and it did kind of make me wonder how exactly the goat's cheese was prepared - freezer to microwave, possibly?
Largely undeterred, we pressed on. Now, the Spinner & Bergamot's main courses are notoriously colossal, so much so that they offer 'small' helpings of various dishes. I went for the small fish and chips (having been defeated by its standard-sized counterpart on a previous visit).

Size-wise, it was more than sufficient. The fish was a decent bit of cod, enrobed in a sunshine batter and flanked by the most superb home-made chips, not to mention several doorsteps of bread and butter.

I really like the fact that the S&B makes its own condiments. The homemade brown sauce is lovely - sweeter than you'd expect it to be, and not as tart as the HP variety. Likewise, the in-house produced tartare sauce gets a big thumbs-up.

Unfortunately, the adulation ended there. Mrs V's steak and ale pie was, again, cold in the middle. What was going on? Were they having a serious off-night here, or what? She didn't bother sending it back; keen to press on given that we'd already exchanged our starters hitherto.

All things considered, it was a rather disappointing affair. I've been to the S&B on numerous occasions and have never had a bad meal. I mean, it is a lovely pub whose atmosphere is par none within the locale.

But, during our visit, there was far too much in the way of inconsistency - you wondered, even, if the chef was having a night off - to warrant another visit in the near future - which is a shame, because I used to really like the place!