CHESTER, LA CANTINA - Lambing It Up 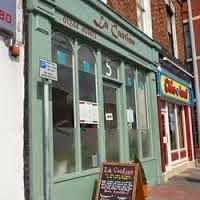 It was one of those muggy, sodden afternoons as can so often write off a Saturday, that I alighted at Chester's terminally unprepossessing railway station. Having taken the long route into town on foot, my senses were unexpectedly arrested by the spectacle of a naked drunkard fulminating outside a Brook Street alehouse. The tavern's proprietress was, to her credit, gamely encouraging the stark-bollock bruiser to reacquaint himself with his kit, but her entreaties fell on deaf, sozzled ears. Now that's really not something you expect to see every day. Not on a rainy Saturday in Brook Street. Not anywhere in Chester. At the very least, our unclothed antagonist could have caught his death of cold. And so, it was that event, coupled with the maddening it's-raining-and-yet-it's-uncomfortably-warm weather, that near threatened to set the tone for the rest of the day. Thankfully, all ill omen was pretty soon vanquished by dint of a very hearty, very rustic meal at Chester's most singular Italian venue.

My inaugural visit to La Cantina was racked with hesitancy. I'd heard praise heaped upon it, quite lavishly, in fact. But the lack of a menu on the website put me off a touch. You can't really be rocking up at a joint not knowing what's on offer, can you? Similarly off-putting, the overly waspish (not to mention tediously protracted) management responses to Trip Advisor feedback. Pretty much along the lines of 'Thanks for the feedback, but we really don't what your sort here.' Cripes! A bit full on, is that. You couldn't help but cultivate the notion that they weren't too keen on criticism over at La Cantina.

My concerns, however, dissolved entirely once I'd actually visited the place. I ate heartily, supped with vigour, and tendered my cherished 20% off voucher from Onion Ring. All was, for a short time, right with the universe. And so, months passed, and a repeat visit seemed inevitable. This time I was compelled by a Tweet advertising a free bottle of vino with your grub. Can't pass up on free wine when it's offered. A crime against nature, that would be. 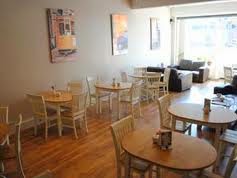 The restaurant's ambiance is best characterised as elegant-yet-restrained. You kind of feel cocooned from the rather insalubrious end of town in which it's nestled. But despite an incongruous location, La Cantina was busy at the time of our advent. Not packed to the rafters, but pleasantly abuzz. It's an intimate little place. Not exactly formal, but not too relaxed, either. The menu, presented on stapled A4 sheets, comprised a selection of keenly-priced starters. Both Our Lass and I plumped for the sauteed octopus and squid.

Now, I'm not a massive seafood lover. However, set down before me the chilli and garlic-tossed remnants of a cephalod mollusc of the order Octopoda, and I am as happy as a clam. (No pun intended.) This was a dish that was light and, thankfully, not at all vinegary. (Many of the vinegar-pickled octopus tentacles I've been served elsewhere have been of sufficient acidity to make your North and South pucker and your eyes brim with tears.) The accompanying sauce was flavoursome and, pleasingly, didn't mask the subtle, delicate squid.

It's a funny thing to talk of a squid as being subtle and delicate. This is, after all, a leviathan which, in its 'colossal' form, is capable of expanding to an eye-watering 14 metres in length, not to mention the armoury of rotating three-way hooks in its possession, that could all but gut a whale. During episodes of the Blue Planet (and other, similar shows in which rare footage of delicious-looking monsters afflicted with abyssal giganticism is shown), I've found myself wondering what the calamari of the Colossal Squid might taste like. Wondrous, would be my guess. And pleasantly salty to boot, from all those deep-sea capers. (Squid and capers. A combination just waiting to be tried.)

Mains materialised in the shape of slow-roasted leg of lamb, marinated in a variety of herbs and accompanied by sauteed potatoes and a pea puree. And bread. And salad, in fact. The dishes at La Cantina aren't exactly cheap (it set me back the best part of £20), but you get a lot of nosh for your nicker. You need a hearty appetite, dining here. Thankfully, the lamb was just the right shade of pink, and as tender as you like. God knows how long it'd been slow-cooking for. Several weeks, if its succulence was anything to go by.

As to dessert. Well, despite the array of Italian staples on show (exotic-sounding flans and so forth), it was a foregone conclusion: it was going to be cheese. It had to cheese. It's always cheese. Well, what arrived wasn't quite what I was expecting. I'm not particularly fond of Scottish oatcakes (whose sandpaper aridity is not too dissimilar to the material with which you would line a budgie's cage), so I wasn't too chuffed to find them befouling my plate in an unsolicited manner. Some of that rustic Italian bread would be far, far better suited to what were, by and large, cheeses of note. The cheeky blue number, a creamy offering, proved the highlight. Similarly, the accompanying chutney was first rate.

But mozzarella on a cheese board? Well, that is just not right. I'm surprised the other cheeses didn't recoil in horror and inch towards the outer-reaches of the plate, in order to avoid contact with that flavourless, banal, mush-like interloper which has no place anywhere near curds of stature. How it has the temerity to even call itself a cheese is beyond my comprehension. And talk about difficult to spell. I'm getting red squiggly lines all over the show, here. But, as far as blips go, this wasn't a showstopper. I ate around the mozzarella and, in so doing, showed it the effrontery it deserved.

On the whole, this was a very good experience. And the gratis Sauvignon - imbibed in tandem with complimentary, fizzy rose - was as dry and as zesty as you like. If you're looking for a classy alternative to some of the pizza-and-pasta-by-numbers joints that grace Chester's busier streets, then you'd be well advised to give La Cantina, a quirky and endearing Boughton mainstay, a try. It's definitely a bit different. It's a touch undiscovered, even. But, once word gets out, it mightn't stay that way.