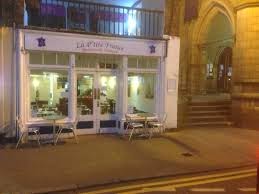 Chester was, in fairness, desperate for a decent Gallic eatery. It veritably ached for one. It was crying out. Not that there's much in the way of the competition, especially after the sudden and unexpected demise of short-lived Cuppin Street bolthole Bouchon last year. What about Chez Jules? You might well ask. Well, that's about as French as tuppence, that place. A quick scan of the menu confirms as much (their Table du Jour boasting Parisian staples such as 'roast pork with an apple compote' and 'grilled seabass with a tomato'. You could almost be strolling down the Champs Elysses, couldn't you?) But that's a conversation best left for another post.


La P'tite France has apparently been relocated from Nottingham and, despite having only been open a clutch of weeks, it's already attracted a legion of admirers. The restaurant's interior is light but cosy and, though initially quiet at the time of our advent two Fridays since, it soon came to throng. There were people dining alone. There were people in large groups. There were people who did actually look French, berets and all. They were vast in numbers. Perhaps that's just the novelty value in action. It might well wear off. Or, perhaps, La P'tite France, with its rakishly-placed apostrophe and convivial ambiance, is offering something a little different from the usual fayre. 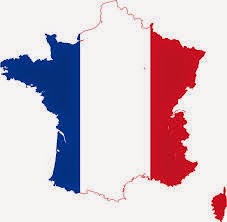 And with a crisp Chablis at £21, we were off. First things first. The bread. Baskets of it. It was amazing. And limitless. Just what you get across the channel. Don't ask me what it's called. It wasn't your bog-standard French stick, that's for sure (Chez Jules take note). Some kind of sour dough, I suspect. But I couldn't put money on that. Soon after, a starter of smoked duck salad proved adequate. It was nice enough. The slivers of duck breast were a touch on the fatty side, but it's a duck salad, right? And duck is a fatty meat. What else was I expecting? Our Lass plumped for the escargot. Now she's a dab hand with the snail tongs, her, but she was rather crestfallen to find that the assembly of gastropod molluscs was presented sans la carapace. Our host imparted that serving shell-on snails is now frowned upon by the environmental health. Further, doing so can jeopardise a restaurant's all-important Scores on the Doors rating.


Now, I've seen enough episodes of the Food Inspectors to know that there are certain dishes and ingredients that the titular scrutineers of that programme go apoplectic over. Rarely-cooked burgers being one example. Kidneys and liver being another. So it doesn't surprise me to learn that the hapless snail should have inadvertently slithered into this minefield. This is probably why you don't see steak tartare on the menu anymore. More's the pity, I say. Raw beef bound with a raw egg yolk does wonders for those wishing to shed a couple of pounds quickly (not to mention violently). Where will it all end? Might we soon see the advent of a Meat Police undertaking to banish from the servery the bloody and the blue? A kind of steak-oriented dystopia? Now there's something to send a shudder. Kill me now, please.


Existential musings notwithstanding, a main course of Entrecote Grillee proved a good bet. And nice and rare it was, too. Still alive. Barely showed to the pan. The hefty slab was accompanied by a rich, Roquefort sauce and a pot of hand-cut chips. It must be said, a better bit of rib-eye you'd struggle to get your mitts on in these parts. At £16.90 it was competitively priced, to boot.

And so to desserts. Well, this was something else. Throughout the evening, I'd been closely eyeing a tray of cheeses that had been surreptitiously doing the rounds between tables. It's always a good idea to have the cheeses on display. Their presence invariably causes one to crave a bit of cheddar, want a wodge of Wensleydale, seek solace in a slice of Stilton. But with this being a French cheeseboard - well, expectations were stratospheric. To be honest, I've always been a bit snotty about French cheeses. They think they're better than our British curds. Brie especially. That is one pompous little upstart. And with no good cause, to my mind. Can it hold a candle to the local delights embodied in Nantwich Blue and Lancashire Blacksticks? Can it heck as like. Nor can a Camembert for that matter. A Saint Marcellin? Possibly.


Well, La P'tite France's cheeseboard almost made me reevaluate my deep seated, long-entrenched anti-French-cheese prejudices. It was otherworldy. And there were no mean slivers either. Full on wedges descended onto the plate one at a time, a little like lifeboats lowered from a mother-ship. Accompanied by the most delectable cherry jam, and more bread, this was the course that elevated the entire evening. I could bore for England as to its virtues. I really could.

And so, best of luck to La P'tite France in its endeavour to foster just a touch of Paris in Bridge Street. I'll be back; if only for the sole cheese board in Chester that could give the Sticky Walnut's a run for its money.